UFC on ESPN 4: Carmouche vs Modaferri, Oleinik vs. Harris, Pennington vs Aldana (1 Viewer)

ESPN’s Brett Okamoto has confirmed that a pivotal flyweight match-up between seasoned veteran top contenders and former title challengers, one at bantamweight and the other at flyweight, is close to finalization for the event.

Looking forward to it.

Staff member
Girl-Rilla is a short, condensed, ball of musculature, but don't you doubt The Happy Warrior at this point.

The UFC has confirmed a slew of new fights for its return to Texas this summer, including notable fights in the heavyweight and women’s bantamweight divisions.

UFC officials confirmed those matchups and more with ExpressNews.com.

Bad fight for Aldana, imo. Sexy bitch better learn how to use those long bilingual limbs the way God intended her to.

Rocky & Roxi on the same card, not fighting each other?
Sign me up. 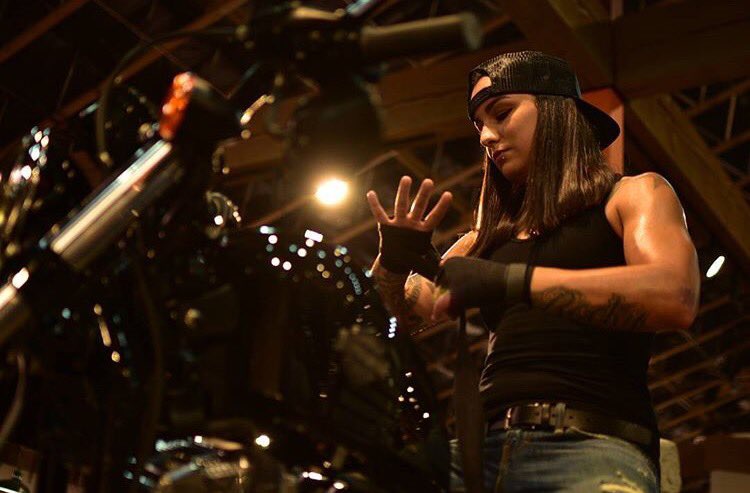 A heavyweight grudge match – at least for one half of the contest – is heading to the Lone Star State.

After months of tweeting and trashingGreg Hardy, Juan Adams has a fight with the controversial heavyweight. MMA Junkie confirmed with a person close to the booking that bout agreements are in the process of being finalized for a showdown at UFC on ESPN 4, which which takes place July 20 at AT&T Center in San Antonio, Texas.

ESPN.com first reported UFC officials are in the process of booking the grudge match. It’s not yet known whether Hardy vs. Adams will serve on the main or preliminary card, though Hardy’s previous two fights were the former.

Adams stumbled for the first time in his professional career when he took on Arjan Singh Bhullar and lost a decision earlier this month at UFC on ESPN+9. But that didn’t stop him from using an expletive-based hashtag for Hardy, who railroaded Dmitry Smolyakov this past month to pick up his first octagon win after a stumble out of the gate.

“Pathetic,” Adams called Hardy’s performance. “It was just ridiculous. It looked like the guy was scared to do anything. I’m not going to say much, but I think it’s ridiculous how they’re trying to push such a poor product on people. The people have spoken like, ‘We don’t want to see that crap. It’s not a good fight, he’s not a good fighter.’ He’s had cans his entire career. The most legit opponent he’s fought was Allen Crowder. Like, c’mon. He’s no world beater.”

Adams professes a genuine hatred for Hardy, and there’s no better way to spread his message than via social media. It appears after all that talking, he’s gotten his subject’s attention.

Indeed, from the moment he signed a UFC contract, Hardy has been a lightning rod for scrutiny both positive and negative. He’s tried to change opinions in earnest while also ignoring those who’ve made up their minds about his well-documented past. But critics are still watching in light of his prominent placement in back-to-back octagon fights.
Click to expand...

Here is the current card for UFC on ESPN 4:

So fucking amped; Helwani and that "talk has cooled" shit, FOH. Game time,

Roxanne Modafferi has a new opponent for UFC San Antonio.

The veteran fighter, who was originally scheduled to fight Liz Carmouche, has been booked to fight Jennifer Maia (16-5-1) in a flyweight bout. The news was first reported by Combate and was later confirmed by MMA Fighting.

This will be the second time Modafferi (23-15) faces Maia, as the two fought for the Invicta FC flyweight title back in September 2016. Modafferi came up short, losing via split decision.

“The Happy Warrior” is 2-2 since rejoining the UFC in 2017. She outpointed Antonina Shevchenko in her last outing back in April. Meanwhile, Maia will be looking to build off her decision win over Alexis Davis in March. Maia is 1-1 in the UFC with her lone loss coming to Carmouche. Maia is a former Invicta FC world champion.

UFC San Antonio takes place on July 20 at AT&T Center and is currently scheduled to be headlined by a welterweight bout between Rafael dos Anjos and Leon Edwards. The main card will air live on ESPN.
Click to expand...

Staff member
Here's an unpopular opinion and I'll be universally hated for it. I'm not a fan of roxi at all in regards to fighting. I don't think she's good enough, or has the skills to beat any real contender.

As a person I think she's wicked awesome and hope nothing else bad happens to her. But as a fighter I don't think she cuts the mustard.

I think that's part of her charm. I'd only take issue with the "real" contender bit – she's already proven wins over Porto, LaRosa (x2), Andrea "Communism" Lee, and Coenen. Probably on the downside of her career at age 36, but a skilled martial artist who could slip a worthwhile win or two here and there for whatever's left of her career. And if she doesn't, I think that's alright too.

Noise said:
I think that's part of her charm. I'd only take issue with the "real" contender bit – she's already proven wins over Porto, LaRosa (x2), Andrea "Communism" Lee, and Coenen. Probably on the downside of her career at age 36, but a skilled martial artist who could slip a worthwhile win or two here and there for whatever's left of her career. And if she doesn't, I think that's alright too.
Click to expand...

I don't disagree with what you're saying, I just can't help but not see it.