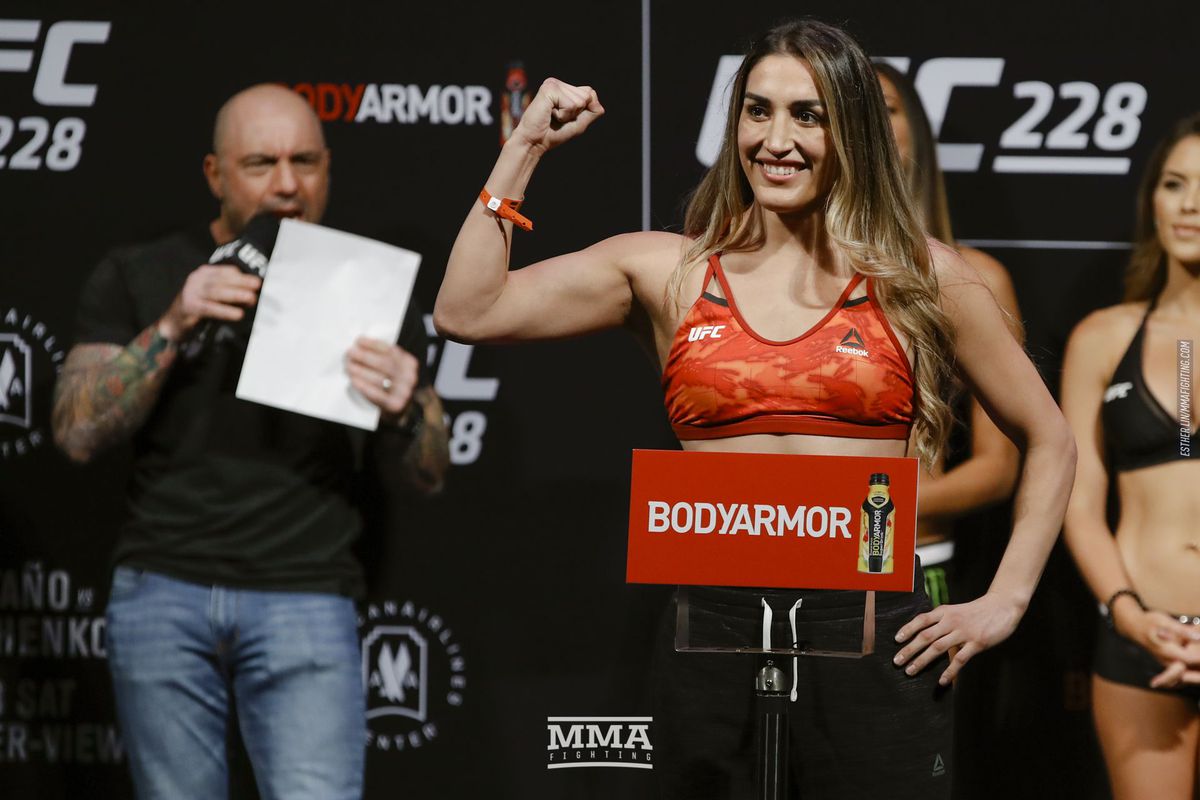 Two top strawweight contenders will meet at UFC 238 with a possible title shot on the line.

The Chicago Tribune is reporting that Tatiana Suarez (7-0) and Nina Ansaroff (10-5) will fight at the upcoming pay-per-view event on June 8. A flyweight bout between Katlyn Chookagian (11-2) and Joanne Calderwood (13-3) is also expected to take place on that card.

Suarez, a standout freestyle wrestler, has been touted as a future title contender since winning The Ultimate Fighter 23 back in July 2016. She won her next three fights in one-sided fashion, defeating former strawweight champion Carla Esparza via third-round TKO in her most recent outing last September to improve to 4-0 inside the Octagon.

Ansaroff has also won four straight after going 0-2 to start her UFC career. The American Top Team product pulled off a major upset at UFC 231 in December, defeating Claudia Gadelha by unanimous decision.

Coming off of a split-decision loss to Jessica Eye at UFC 231 that snapped a three-fight win streak, Chookagian will be looking to steal Calderwood’s momentum. “JoJo” is 3-0 at 125 pounds, recording back-to-back wins against former KSW flyweight champion Ariane Lipski and Kalindra Faria.

UFC 238 takes place on June 8 at United Center in Chicago.
Click to expand...

LONDON – Joanne Calderwood’s next octagon outing is scheduled to last up to three rounds, but she is preparing to be in five-round shape.

That’s not just an extra step to make sure Calderwood is in optimal condition when she meets fellow flyweight standout Katlyn Chookagian at UFC 238 on June 8. That’s also a conscious precaution, just in case something happens to the title fight set to take place that same night between 125-pound champ Valentina Shevchenko and Jessica Eye.

Considering how quickly things shift in MMA, that’s certainly not a crazy idea. And, in Calderwood’s case, it comes recommended by none other than UFC President Dana White.

“I saw Dana at the (UFC’s Performance Institute) and he told me that I should be ready, and I said, ‘I’m already ready,’” Calderwood told MMA Junkie today in London, where she’s appearing as a guest fighter at UFC on ESPN+ 5. “And I’m going to be hitting that weight – 125, championship weight – and just be training for a five-round fight. Because you just never know, especially in this sport – it’s such a crazy one. So I’m definitely going to be ready.”

Of course, as clever as this extra step is, it isn’t necessarily simple. Not only will it involve Calderwood being in five-round shape and ready to do without that one-pound allowance, it also means she’ll have to strategize for multiple foes. Regardless of how much weight one puts in opponent-specific preparation, that inevitably plays a role.

To that, Calderwood argues: In a sport as volatile as MMA, isn’t it always useful to be aware of your surroundings?

“In any fight, you could face the opponent changing the week of or even the day before,” Calderwood said. “So I think it’s good to always have your eye on your other opponents, especially people that are on your card.”

In any case, that will be left for Calderwood’s (13-3 MMA, 5-3 UFC) coach to figure out. Her job is to listen and be “in the best shape” of her life. Even if those extra rounds aren’t necessary, having something left on the gas tank should help her in the type of fight she expects against “awkward” foe Chookagian (11-2 MMA, 4-2 UFC).

“She’s a talented girl, but she’s always on her back foot,” Calderwood assessed. “So I’m bringing my running trainers and going after her.”

Even if UFC 238’s title fight goes as planned, though, a title might not be too far in the horizon for “JoJo.” She does, after all, enter the bout on the strength of a two-fight winning streak – and an overall 3-0 run in the UFC’s blooming women’s flyweight division. Calderwood most recently spoiled the UFC debut of former KSW champ Ariane Lipski.

And then there’s the fact that her opponent isn’t in a bad spot, either. Although Chookagian is coming off a loss, it comes with the extenuating factors that it was a split decision, to the current title challenger. Chookagian was on a three-fight streak before that, with two wins at the 125-pound division and one at bantamweight.

Calderwood is currently the No. 14 fighter in the latest USA TODAY Sports/MMAjunkie MMA women’s flyweight rankings, while Chookagian appears at No. 6.

Considering records, timing and circumstances, it’s fair to assume that this bout may very well determine the last challenger to the belt that Shevchenko currently holds. With assumptions often proving dangerous in the UFC, though, Calderwood is probably wise in being slightly cautious in those expectations.

“The division right now is kind of a bit cluster(expletive),” Calderwood said. “People are leaving, going up and going down and then those people coming up, so right now it’s kind of shallow. So anyone could get in there. But I feel like, for me, this will be my fourth win in the flyweight division, so definitely feel that I’ve earned that in the division and can’t see why not, especially if I go in there and put on a good performance.”

By putting on a “good” performance, Calderwood doesn’t just mean winning. Confident that her team has cracked the Chookagian puzzle, the plan is to go there and dominate. She’s expecting an “ugly fight,” but one that she can hopefully make look easy to those watching.

Succeeding in her mission in on July 8 will probably make watching that night’s flyweight title fight all the more interesting. But, though she does have a preference of opponent, Calderwood doesn’t seem too concerned with who comes out on top.

“Yeah, everyone’s got a chance,” Calderwood answered, when asked whether Eye had a chance to beat Valentina. “Honestly, for me, I feel like Valentina is going to take it. But, also, I don’t care who takes it. Obviously, I would fight both of them, but I would want to fight Valentina. I just feel like her style is exciting, it would make a good fight between me and her.”
Click to expand...

PHILADELPHIA – Earlier this month,Joanne Calderwood said she would beprepared to step in should anything happen to a title fight between champ Valentina Shevchenko and Jessica Eye.

The suggestion, Calderwood said in a chat with MMA Junkie, came from none other than UFC president Dana White. And it’s certainly not that crazy of an idea, considering Calderwood was already set to take on a fellow divisional contender in the same UFC 238 card in which the women’s flyweight title fight will take place.

The small snag in the plan, though?

The fact that Calderwood’s opponent,Katlyn Chookagian, says she got told the same thing. And, while she doesn’t seem to be necessarily losing sleep over the whole thing, Chookagian does believe she has a better case than “JoJo” to fill in for the title fight if it comes to it.

“They told me that, too,” Chookagian told reporters, including MMA Junkie, during Saturday’s UFC on ESPN 2 at Wells Fargo Center in Philadelphia. “And I would imagine – I’m ranked 3, she’s 7. So, it kind of makes sense. I just lost a split decision to someone fighting for the title and she just beat a (debutante), so it doesn’t really make sense for her to get that over me. It makes perfect sense, but yeah – I’m sure she wants that. Everyone does.

“… I’m confident I will get it, but I’m not concerned with that. I’m just concerned with my fight. If that happens, we’ll figure it out then. It was the same situation for me in my last fight, when me and Jessica were on. I was also the back-up, so I’ve been there and done that before. I’m not worried about it, we’ll figure it out if it happens. If not, we’ll focus on Joanne.”

Chookagian has, indeed, been in this position before – twice, actually, albeit in different circumstances.

The first time was when Shevchenko and Chookagian’s training partner, Sijara Eubanks, were tapped for a vacant flyweight title fight that ultimately never materialized. Later, at UFC 231, Chookagian was the alternate in case there were issues with either Shevchenko or ex-strawweight champ Joanna Jedrzejczyk.

As we know, no back-up was needed. Shevchenko would go on to fight and beat Jedrzejczyk, while Chookagian ended up suffering a split-decision loss to Eye that same night last December. The result snapped a three-fight winning streak for Chookagian – all decisions, over Irene Aldana, Mara Romero Borella and Alexis Davis – and credentialed Eye to have her own shot at gold.

Calderwood, in turn, most recently beat former KSW champ and UFC newcomer Ariane Lipski to add a second win to her own streak. Overall, she’s 3-0 in the UFC as a flyweight, with losses to Cynthia Calvillo and Jessica Andrade at strawweight sitting between her current streak and a 125-pound win over veteran Valerie Letourneau.

Chookagian is currently the No. 6 fighter in the latest USA TODAY Sports/MMAjunkie MMA women’s flyweight rankings, while Calderwood appears at No. 14.

It’s by no means a stretch to think that, even if UFC 238’s title fight doesn’t require a back-up, either flyweight could be the next challenger. But, while Chookagian does see herself in that position, she is careful not to let herself think too much about it.

After all, too much happens in this sport for people to cling to these hopes – and, as someone who witnessed thewhole Eubanks debacle up close, Chookagian would know.

“You have to be prepared and able to adjust to any situation and not let it get too emotional about it,” Chookagian said.

Chookagian applied the same pragmatic approach to her loss to Eye. Of course losing a title eliminator is never fun, but she says she shook it off later that same night and moved on pretty quickly. Rather than mope over the past or let her mind wander too far into the future, Chookagian is focused on the opponent she has in the present.

When asked to giver her own breakdown of the fight, Calderwood (13-3 MMA, 5-3 UFC) defined Chookagian (11-2 MMA, 4-2 UFC) as a talented, but awkward opponent, and said she’d be taking her “running trainers” to chase her around the octagon.

For her part, Chookagian isn’t worried about Calderwood’s assessment. Say what you will about her style, but it’s led her to amass an impressive record that only holds two losses. As she heard from a friend who also happens to ne an unbeaten UFC fighter in Gregor Gillespie, “winning is the only important thing.” And Chookagian will do what needs to be done to make it happen.

“I think if you kind of lack understanding of footwork and technique, you can kind of say that I just run away,” Chookagian said. “I’m not the type of fighter who just stands there and doesn’t move and just punches and gets hit. If you look at all my fights, a criticism of mine is that I run away, but if you look at all my fights I usually have no marks on my face, my other opponents’ faces are completely marked up. So I’m obviously hitting them. It’s working.

“Like I said, I just think it’s people that don’t really understand high-level footwork and movement, so they kind of criticize it and just say, ‘I want to fight, I want to have a war.’ It’s like, you have to do that because you don’t have the technique or footwork. So, it doesn’t bother me. I think it probably bothers her, because she definitely has cardio issues and keeping up with my pace is really hard.”
Click to expand...